In Berlin – unlike in any other European city – has appeared construction and destruction, abandoning of space, no man’s land and the appropriation of the city by nature. Where, if not here, could the urban landscape, conceived by Scharoun, be developed further?

The space between Potsdamer Straße, St. Matthew Church, Kulturforum and the Chamber Music Hall (Philharmonie) becomes a public square and also a vibrant landscape. In the beginning it is pure form (ornament), later it will become partially a wilderness, and rain, sun and its divers use will reset it to the form (ornament) again. This flow out of the form and back to the form is considered a symbol for the eventful history of this part of Berlin, which was characterized by formation and dissolution of space, structure and certainty in the 20th century. 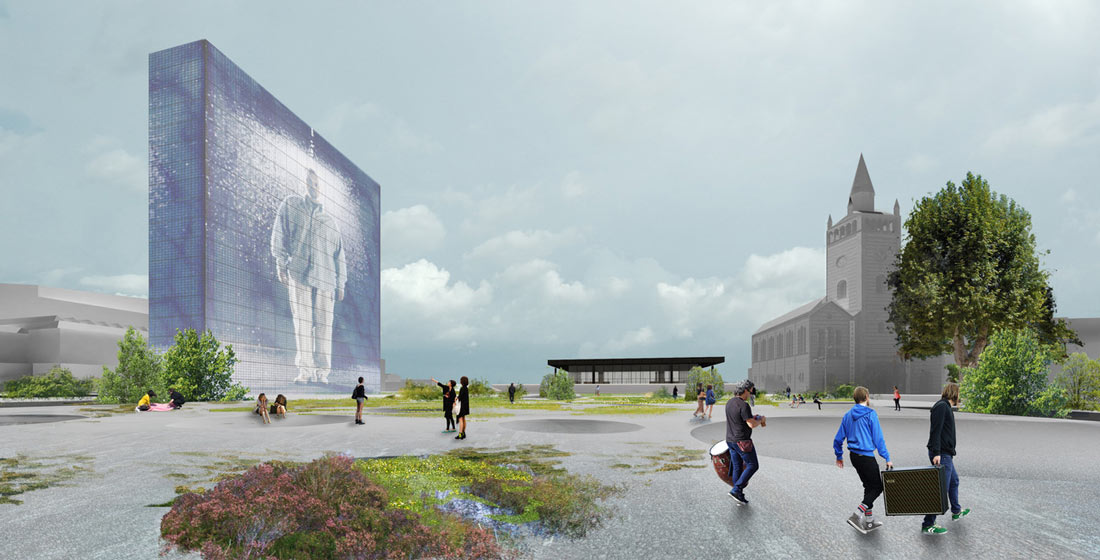 The square offers sufficient space for the rapidly changing forms of public use. In addition to its function as municipal park it suitable for political manifestations, citizens’ assemblies, markets and artistic pratices of all kinds 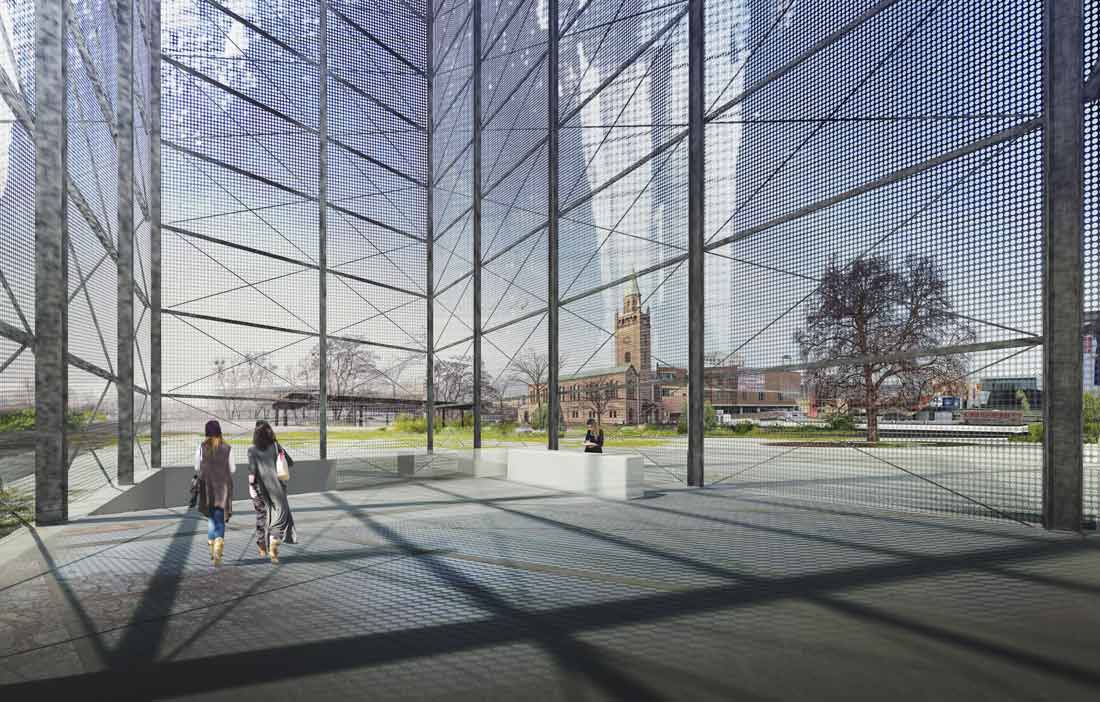 The main entrance of the museum is located in the newly added tower, which also houses the visitor centre of the Kulturforum. As the only vertical element of the museum the tower forms a new urban landmark. Due to its positioning close to the Potsdamer Straße a spatial dialogue emerges, both with the ensemble of New National Gallery, Chamber Music Hall, St. Matthew Church and Picture Gallery as well as with the State Library on the opposite site. 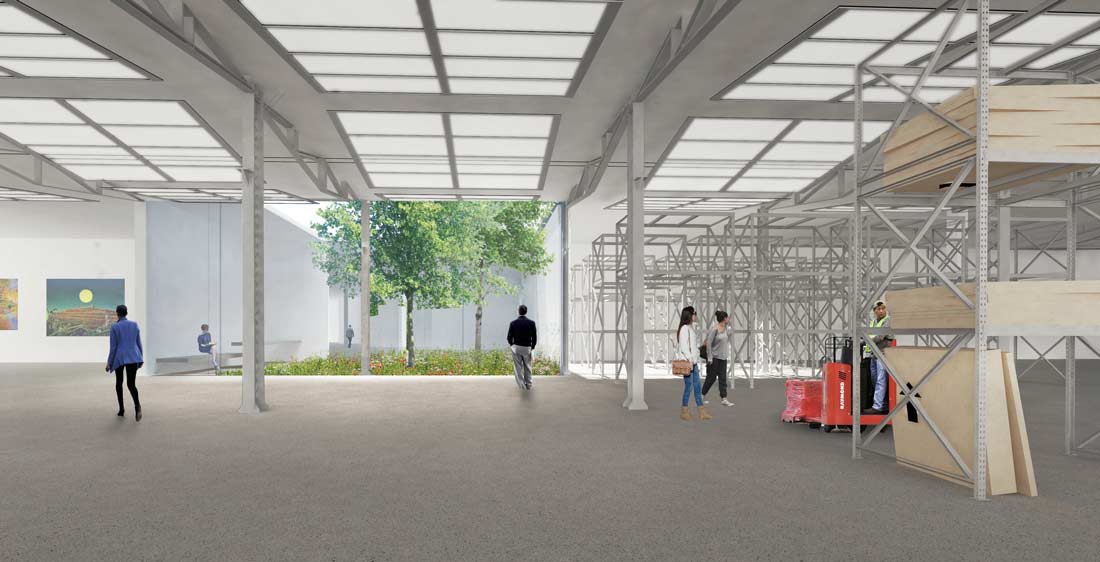 However the museum building is not left completely below the surface. In fact the museum space is connected with the square by its visitor tower and the atriums. The trees that are standing in those glass-coated “garden-cells”, can be seen from the street only with their tree tops. They show some strange and unusual organic growth habits to the pedestrians. The museum is an archive and an exhibition space. Like at a “Schaulager” (museum warehouse) the spatial and material aesthetic of warehouse and white cube are combined in its interior. All necessary building standards are reduced to their absolute minimum. 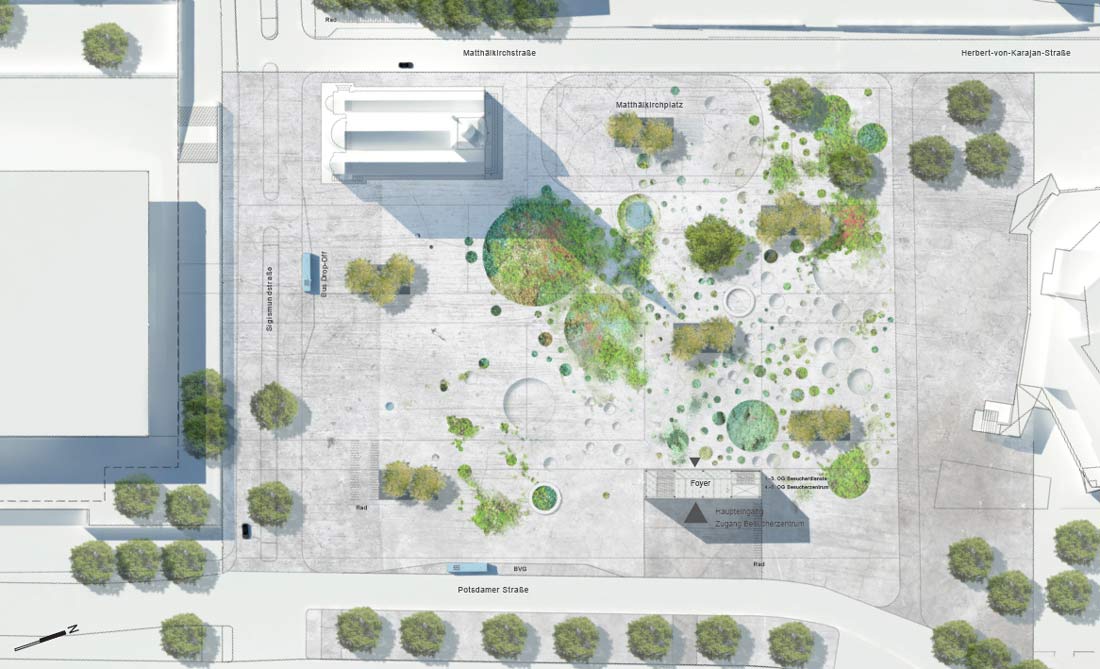 The roof of the museum is equipped with “sunk-in” bowls of different floor depth, in which the plant and animal life of the surroundings can settle down and then spread successively. Between the bowls the concrete roof is flat. Here spaces for paths emerge where the use provokes them.

Over time the vegetation grows out of the bowls over the roof surface and joins with the plants that grow out from the next bowl. In this way the technical building infrastructure receives the aura of colonisation by nature and larger areas emerge which are occupied by nature temporarily and which seem inaccessible, until they are reset to the geometric outline of the bowls by a dry summer or by gardening interventions. This also refers to Scharoun’s idea of “Landschaftlichkeit”, that opposes geometry and as well is a metaphor of utopia and freedom.

Diversification of the plants over time

The plants form habitats for animal species of the inner-city biotopes, like cicadas, grasshoppers and birds. Maybe also racoons, weasels and foxes from the nearby “Tiergarten” might change to the vegetation islands. Whereas the dynamic of the vegetation development is very slow on the shallow soil, it will be faster on the deeper soil and lead to a rapid change of vegetation patterns. Very dry summers will set back the vegetation development, and after it will unfold again.

Diversification of the animals over time

On the site, between the Philharmonie and the National Library by Hans Scharoun, between the New National Gallery by Mies van der Rohe and the St. Matthew Church by Friedrich August Stüler, there is no space for another monument. The new museum building is located in the center of the Kulturforum and offers on its roof a free and democratic space for spontaneous uses. Architecture that not only enables but promotes the coexistence of humans, animals and plants 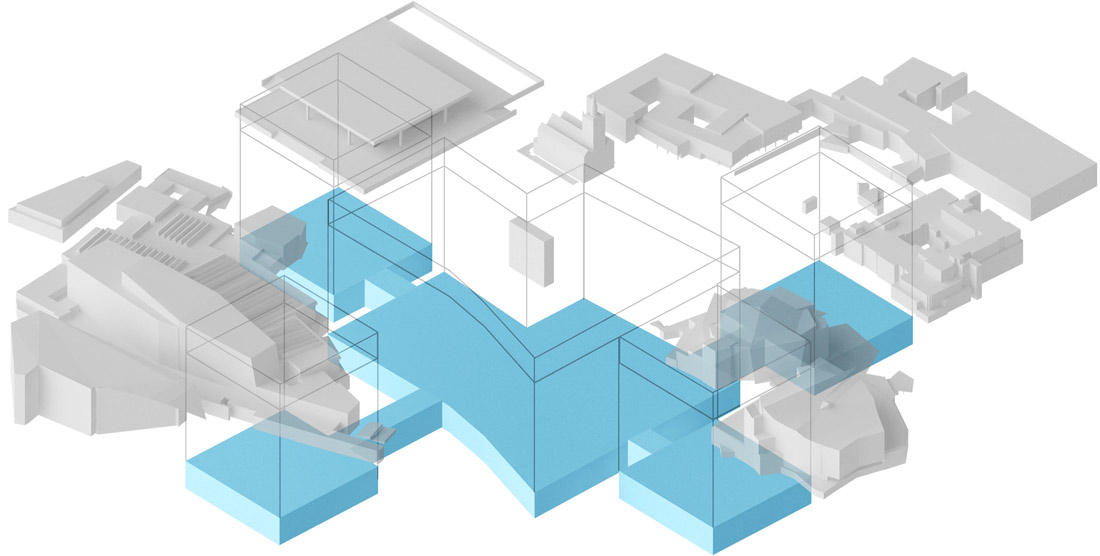 National Gallery and Philharmonie will stay the dominant representatives of the architecture of the 20th century within the city ensemble. The museum is built below the open space that has been developed and it forms a functional unit with the lower level of the National Gallery. It works as a crosslink. Besides his integrative function on the level of the square, it is providing underground connections to the other museums, the Philharmonie, the National Library and the underground car park.