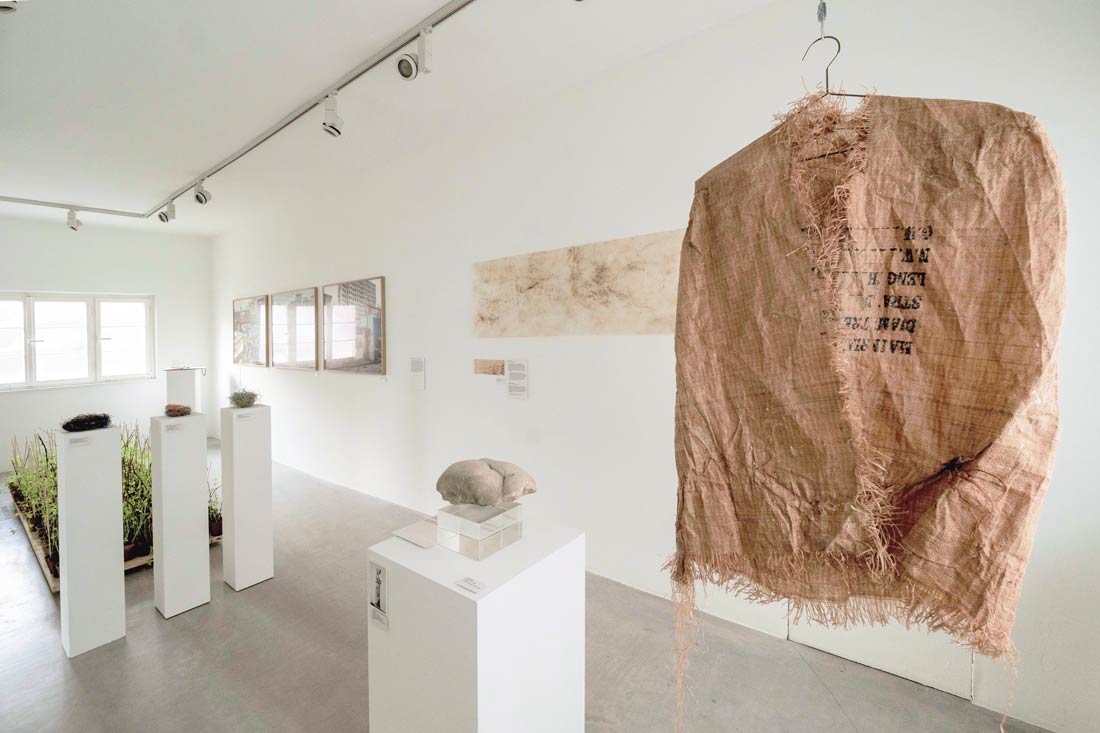 The Thinker, Men’s New In, 2019
Heavy duty bag, polypropylene fabric.
From the archive of civilization artifacts (2000-2022).
Place of discovery: coast of the island of Mallorca, Spain

The heavy duty sack, woven from toxic synthetic fibers, looks like a medieval clothing rag whose wear and tear, artificial holes and materials still play a role in fashion design today. The title of the work alludes to August Rodin’s sculpture ‘The Thinker’. This represents a man who is brooding in tension and internalization about the actions and fate of mankind. 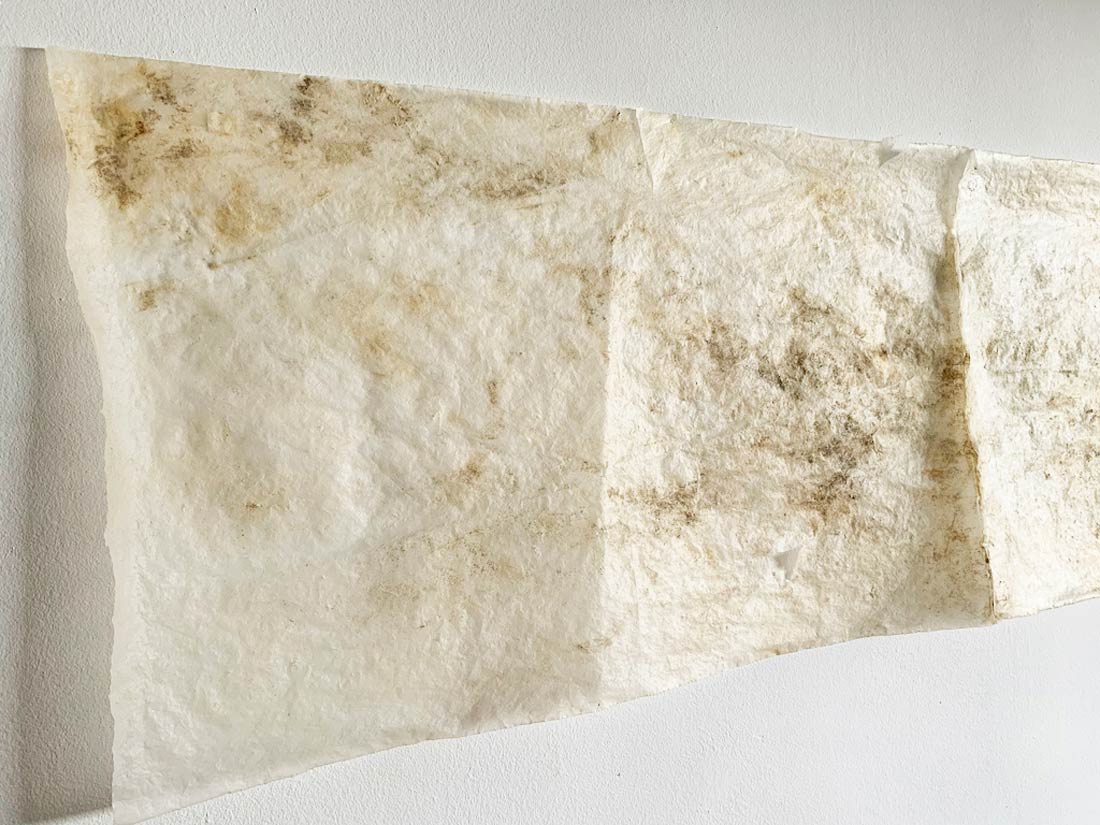 Natural Landscape, 2018
Polymer film with algae and sand deposits.
From the archive of civilization artifacts (2000-2022).
Place of discovery: Rømø, Denmark

Nature (forces of water, salts and algae) create an image that bears similarities to ancient,
traditional Asian landscape depictions. The work emphasizes the beauty of nature and its similarity to human creation. 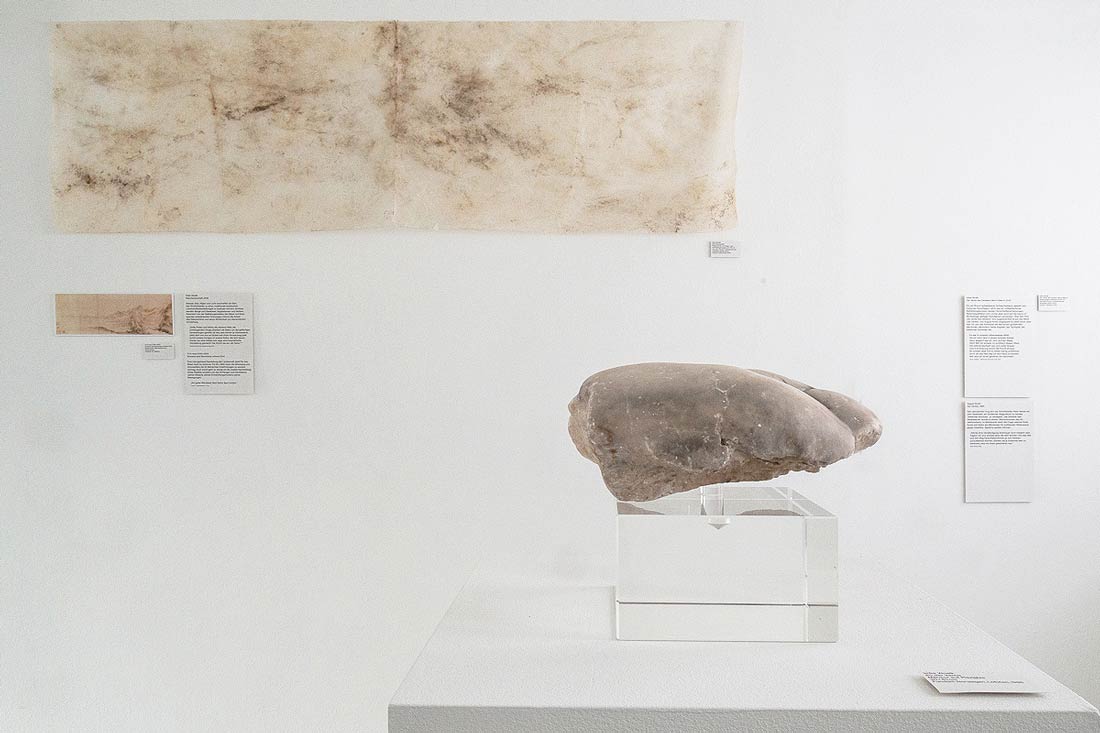 Venus’ buttocks, 2000
Marble on plexiglass
From the archive of civilization artifacts (2000-2022)
Place of discovery: Lofoten, Norway

This accidentally discovered stone is irritatingly reminiscent of a classical (Greek/Roman) sculpture fragment.
“The Earth can be transformed in the 22nd century into a permanent paradise, or at least into a promising beginning of it.”
(E. O. Wilson, The Social Conquest of Earth, 2012) 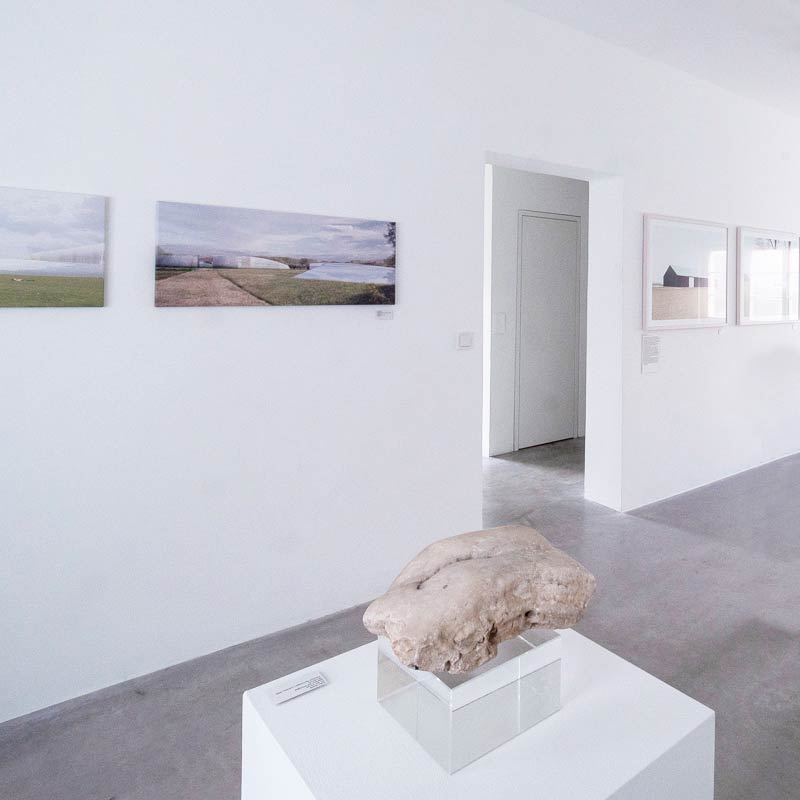 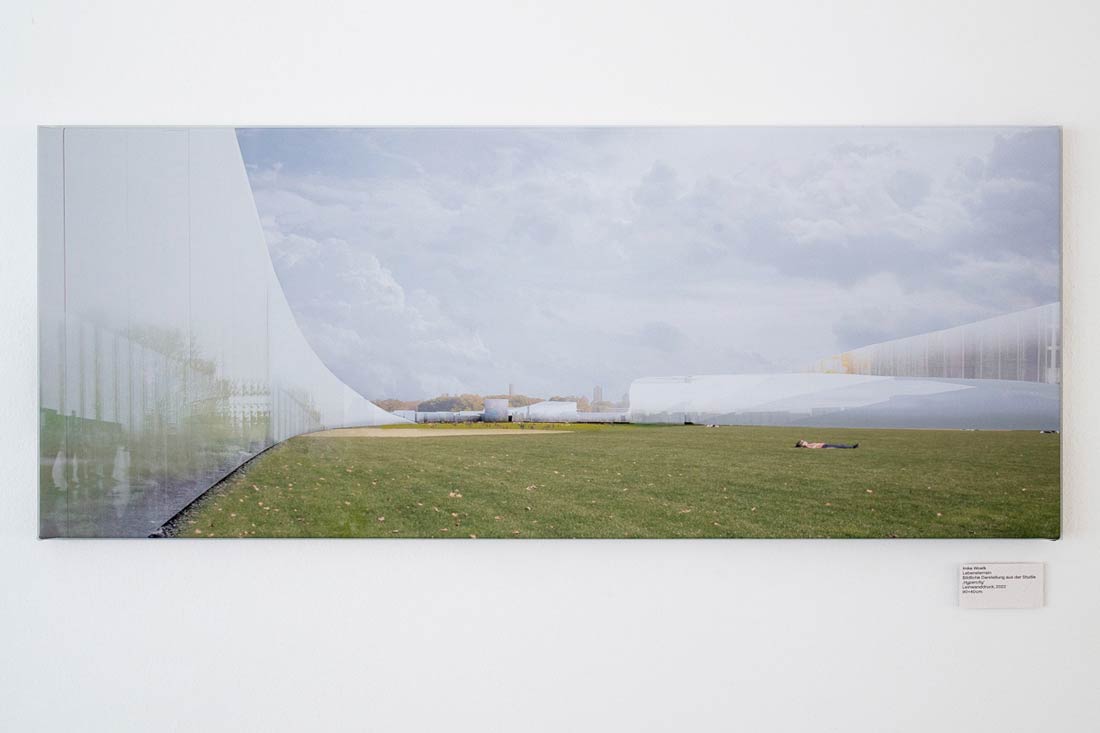 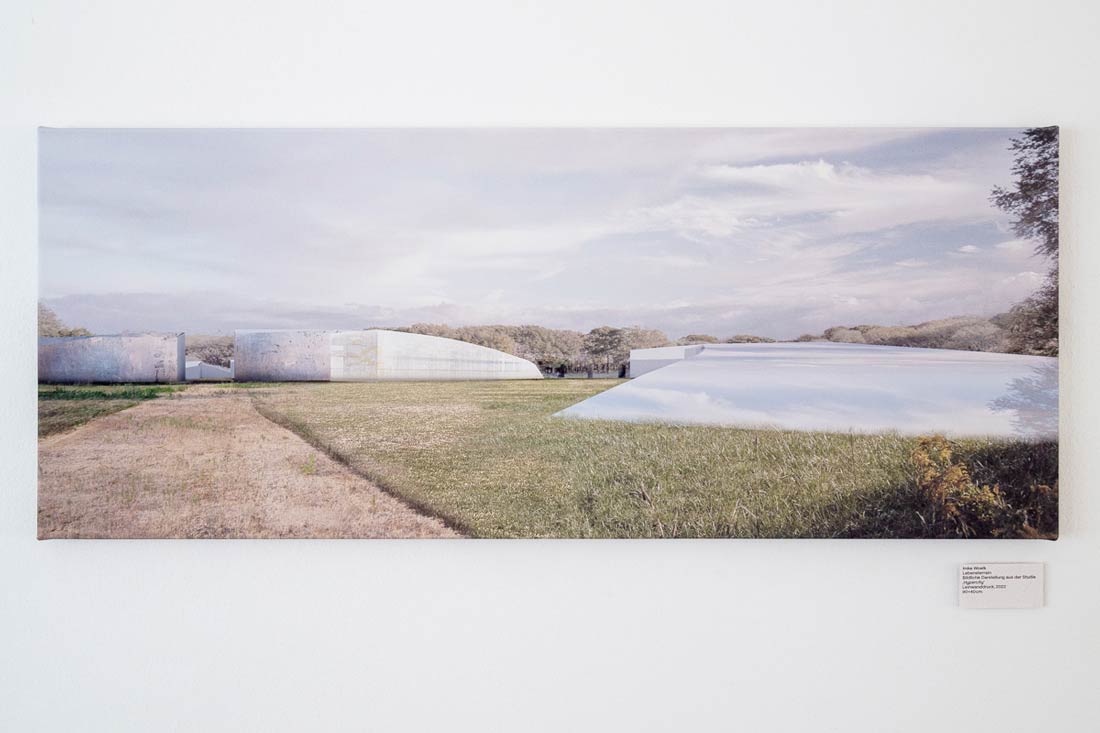 Urban landscapes, 2022
Perspectives from the study ‘Hypercity’
Print on canvas

The visualizations come from a visionary concept for urbanization corridors within natural spaces.
A human settlement form connects with its environment to form a social, functional and formal unit.
Existing resources are efficiently utilized for new habitats, and humans are interspersed between plants and animals firmly integrated into stable ecosystems.
“Vulnerability – one’s own and that of others – as the starting point of a new ethics of planetary coexistence.” (Georg Diez to Corine Pelluchon, Berliner Zeitung, Jan. 15, 2022) 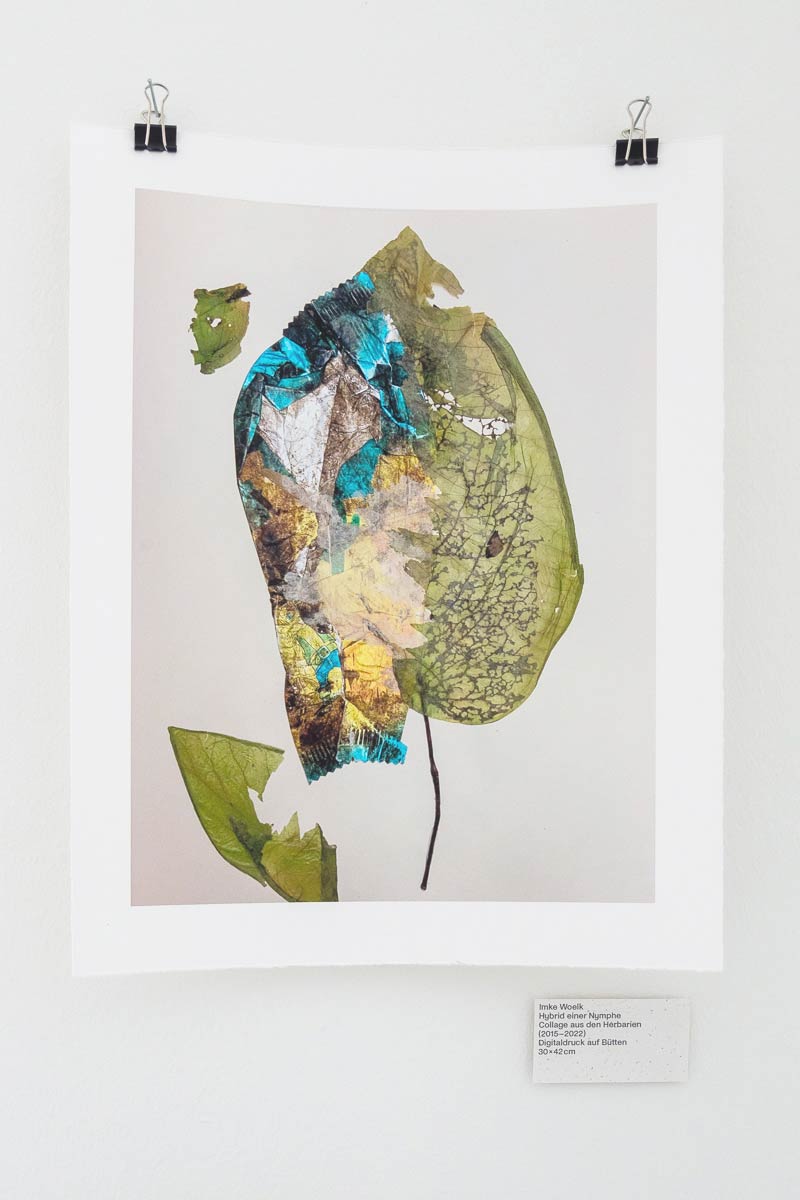 The leaf combines with its man-made equivalent packaging paper) to form a single entity. A new plant-human relationship becomes an expression
of interrelated action. A meditation on the importance of the plant for our life (breathing, nourishment for body and senses), our way of thinking
and our relationships with human and non-human beings.
“Humans are a biological species in a biological world. Although we stand out in many ways, we are and remain an animal species of the global fauna”
(E. O. Wilson, The Social Conquest of Earth, A Biological History of Humans, 2012) 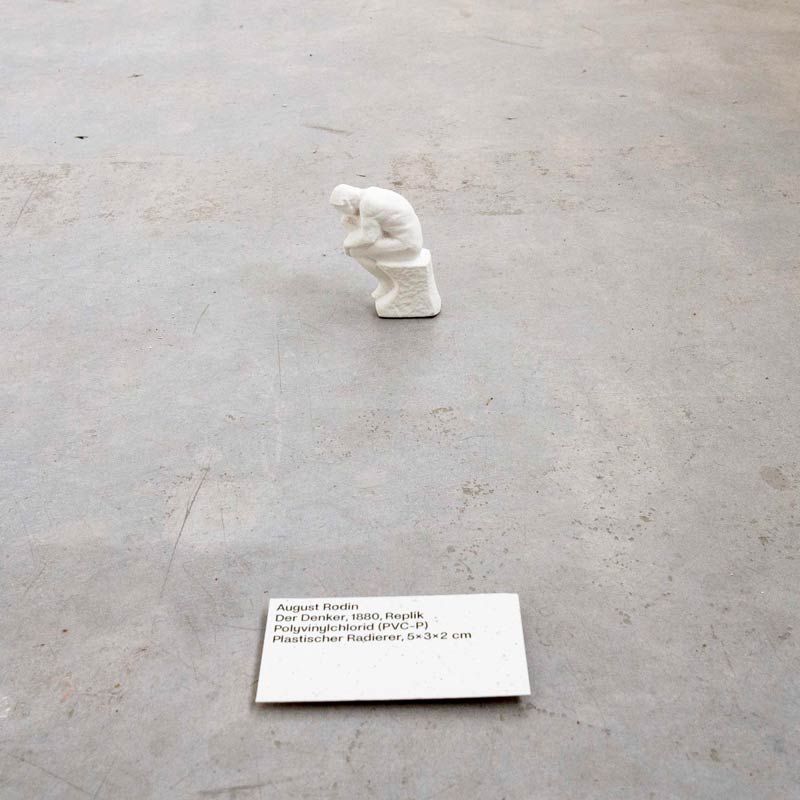 The exhibition questions the usual separation between culture and nature, human and environment. The world at the beginning of the 21st century shows that the earth and the living conditions therein are directly and indirectly influenced by humans to the extent that they are no longer reversible: the world is an artifact and we are part of this world. This makes an Outside as a human-independent construct more questionable than ever. The fine line between humility and self-awareness, powerlessness and responsibility is the subject of this exhibition.
Christian Holl, curator